This project for Melbourne Water developed from an exhibition piece in Melbourne’s State of Design Festival - into a series of large scale prints - and released as an online interactive data visualization and foyer prints.

OOM Creative were selected as one of four innovative design teams for the 2010 State of Design Exhibition entitled Creating Liveable Cities. Sponsored by Melbourne Water the exhibition examined the issue of water within urban environments and OOM Creative’s response was presenting 10 years of water data as an realtime installation and large scale prints.

OOM Creative’s challenge was to present 10 years of data from Melbourne’s water systems in an elegant and memorable information visualization. We were interested in how data could tell a story over time – and through some early prototypes – discovered that placing the water data in circular formations generated intriguing and informative shapes; working both as graphics and animations. Each day of the year is arranged clockwise around a circle, and then the values for rain fall, reservoir storage, river level and sewerage are plotted on these days. Immediately you see how the seasons shape our water supply, the amount of variation there is in a decade, and how our behavioural patterns affect the water output from the city. As designers we’re interested in how people take away their own readings of the graphics, by understanding a decade of information, a year, or simply a day in the life of Melbourne’s water systems.

Try the interactive web version: play with time to reveal a decade of water systems data (screenshots below). (requires Flash) 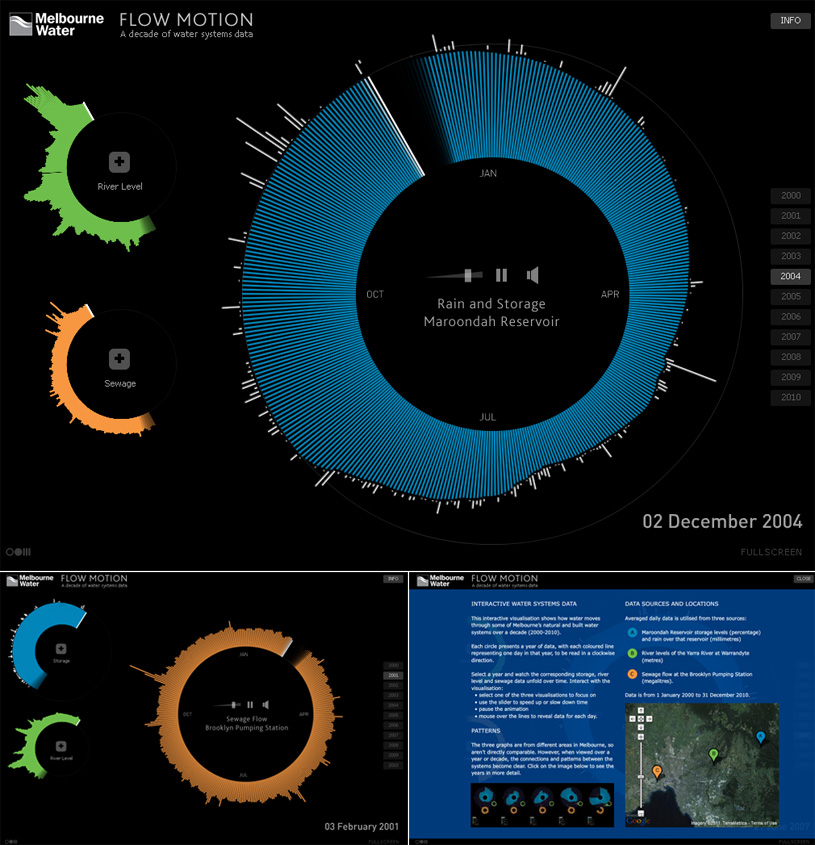